Up-and-coming distance runner Megan Eckert shares her story of training for her first 40+ mile run, highlighting the pitfalls of today's conventional wisdom in distance running, the injuries that commonly arise as a result, and the future PWR Lab is striving to create. 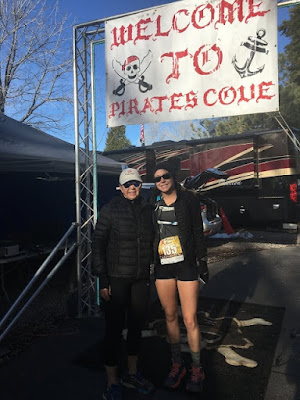 Deconstructing an IT Band Injury

I trained as I would for any 50k, because all the advice I had read stated that it would be detrimental to go on long runs over about 25 miles due to the recovery time and injury risk of running that distance on a weekly basis. I gradually increased weekly mileage over 12 weeks and ran a tune up 25k race 6 weeks out. I lifted weights 4 times a week, with an emphasis on building leg and core strength. A typical training week looked something like:
My weekly mileage peaked around 70 miles, and I occasionally took a Monday or Friday completely off, or cross trained if I was feeling fatigued. The build went smoothly and I was feeling extremely prepared. I built in a 2 week taper, by the end of which I felt like I could run a thousand miles—I hadn’t been able to get all of my extra energy out with only running about half of the mileage I was used to.

The race was Friday and everything aligned just right. I would fly from San Jose down to San Diego in the middle of the afternoon Thursday, where I’d be picked up by my crew and driven two hours through traffic to the small mountain town of Julian, 8 miles east of Lake Cuyamaca, where the race was held.

Friday night while we were eating dinner in Julian, I received an email from the race director stating that about half of the two-mile loop course was covered in 10-12 inches of soft snow that had been freezing every night and melting out every day for the last five days. Okay, so half of whatever distance I ended up running would be over slush. I’d hiked hundreds of miles on slush and ran plenty of miles on hard packed snow, it couldn’t be all that bad.

I proceeded with my plan to participate in the 12 hour race and just stick it out for as long as I felt decent and was having fun. I could always stop at 50k or at the 6 hour mark if it was really all that bad.

This particular race had the latest start time of any long distance event I had participated in. By 8 am when the gun went off, it was 50 degrees out and the snow was already starting to melt. With about 150 people (across the 6, 12, and 24 hour events) stomping over the soft snow every 30 minutes or snow (ha! Get it?) the ice turned to water and eventually into mud. 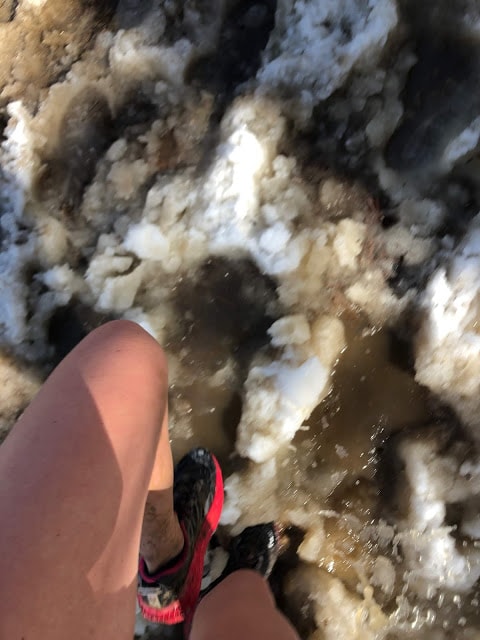 I hit the 10 mile mark (5 loops) just before 9:45am. Feeling strong, I held onto my ~20 minutes-per-lap pace, jogging the flats and downhill, and hiking up the one small hill on the course. This pace worked well! I was the first woman through 10 miles, 20 miles, and marathon distance. At 26 miles, my left knee started to hurt, but everything else felt good so I carried on as planned. 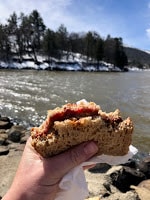 Double-fisting PB&J sandwiches, I set out for a slow lap to eat and give my body a little break and time to digest before I pushed the next lap and a half for a 50k PR. As I closed in on the end of my 14th (and slowest) lap, one of my crew members asked what was going on as I appeared to be in pain. I explained that I had some pain on the outside of my knee, but since the rest of my body felt strong and fresh, I would continue racing.

I hit my 50k PR just after 1:30 in the afternoon. By this point, the snow covered sections of the course were deep, wet, slushfests. My crewmember handed me an IT Band strap as I passed him heading out on my 17th lap. I stuck it on and kept running. I kept a steady, slightly slowed, pace for the next few laps. I turned my music down and did some checks. Was I hunched over? No. Did I hurt anywhere above the hips? No. Had I developed any blisters or chafing? Yes, but what did I expect running through mud and snow for hours? Finally, I noticed that since my right hip had fatigued, I was heavily favoring my left leg. This extra stress wore down my gait to something that probably more closely resembled a deer learning to walk than a human running.

Pushing Through the Pain

Mindful of my fatiguing right hip and increasing left knee pain, I used lap 20 as another sandwich lap. As I stumbled through the finish line/check point area, the race director congratulated me on being the first woman through 40 miles! This little confidence boost (and probably the calories from the peanut butter) allowed me enough strength to head out for two more laps before I’d had enough.

It wasn’t really until the final lap, around 5pm (9 hours into the race) that I acknowledged the severe pain I had been in, and how long I continued running in pain. Everyone in the ultrarunning world tells you that there will be pain. But how are you to know what pain you can push through, and when the pain is a signal to stop? Coming from a family that tends to believe injuries and sickness are “all in your head,” I had told myself that any doubts about being able to run THAT far were all in my head, and tried to simply push past the pain.

I wish I had realized sooner that enduring so much pain could be harmful to me beyond the race. I wish I had stopped before accumulating enough damage to take me out of running for two whole months. After the race, I looked back at where I might have gone wrong. Though happy with my 50k PR time, as well as a new longest run, these personal bests came with strings attached, despite having done everything right according to the conventional wisdom in this space. For the longest time, I wanted to blame my injury on bad luck with the weather and having so much snow on the course. I felt great on race day, and as far as I could tell, I was well prepared. And so I told myself that I didn’t push too hard for my body, I pushed too hard for the conditions. The reality is that I had my sights fixed on running 50 miles that day and, for one reason or another (my fitness, the conditions, a combination), I was not prepared to do so.

Here’s the thing about conventional wisdom: it’s conventional because it’s been done for a long time, and not because—in the case of distance running at least—it’s the best course of action. In running it seems like conventional wisdom leads to conventional injuries, and that’s just not good enough. The most frustrating thing for me has been not knowing where I went wrong, and not having a way to objectively understand preparedness while training toward a specific event.

This is why I’m sharing my story with PWR Lab. PWR Lab exists for me; for every person who loves to run and push their limits, but has had their body (and heart) broken by an injury they didn’t understand. In a world where everyone is constantly generating massive amounts of data—runners included—PWR Lab is finding a better way to move beyond conventional wisdom, and help runners to understand their injury risk and preparedness. The solutions that minimize the guesswork and the setbacks will become the convention, and I’m looking forward to training with PWR Lab on my side for my next 50+ miler. 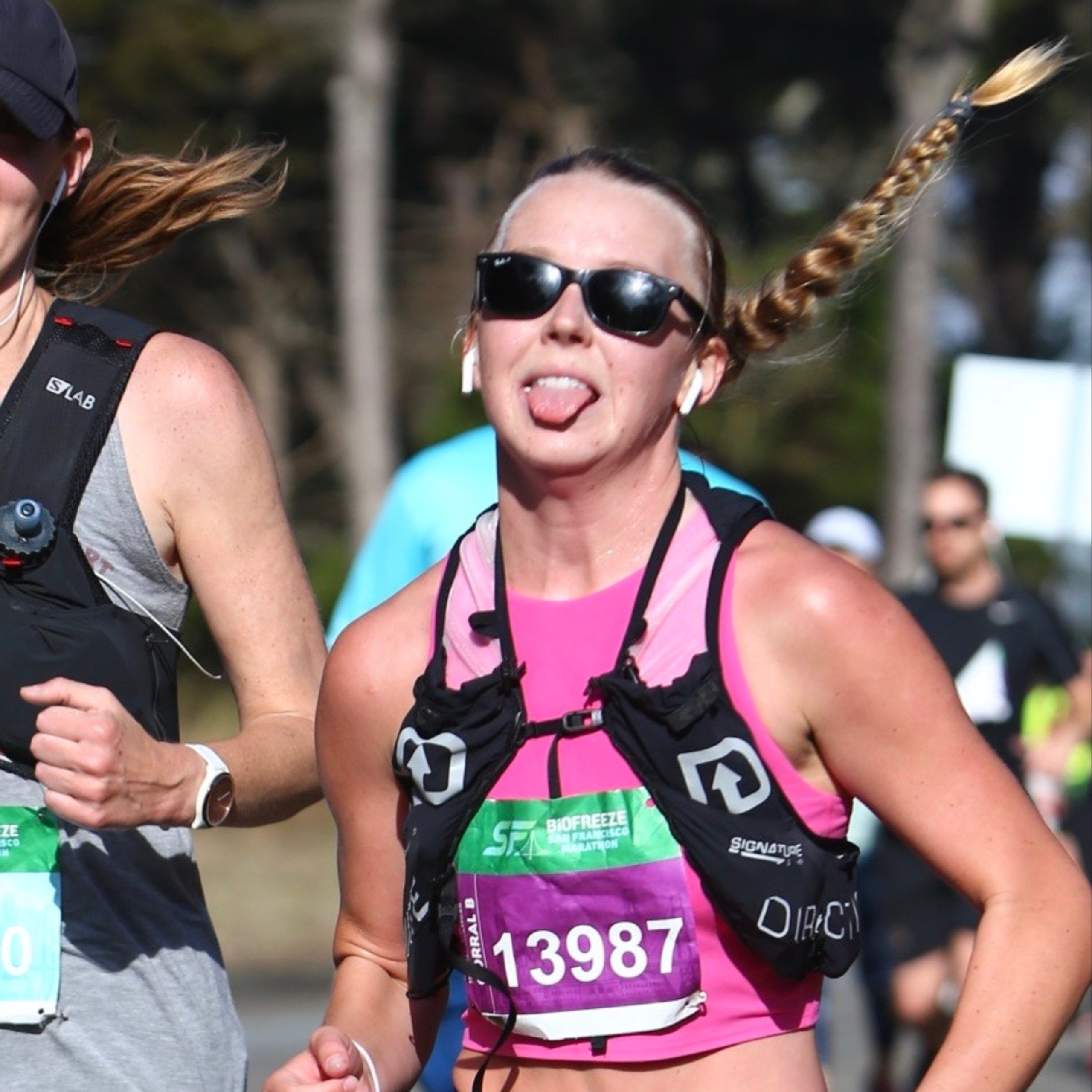 Megan is a psychology student at the University of California, Santa Cruz, and an up-and-coming distance runner. She won her age group in her debut race (a hilly 50k trail run), and proceeded to place as the second woman overall in her next race (a 12-hour race through the slush and mud). Megan has a passion for running, hiking, surfing, and nature in general, as well as a growing curiosity for data